On Halloween night of 2009, Metallica played a concert in the city of Quebec on their extensive World Magnetic Tour. Recently the band released the concert on Blu-Ray and Dvd, and let me say this is a great concert movie, but else would you expect from the San Francisco thrash giants.

The movie is shot in excellent quality, and is done in a professional manner. It is definitely was not shot guerrilla style as many of today’s concert movies are, as the shots and angles seem like they are well planned, and the band doesn’t seem to let the camera crew get in the way of putting on a great performance for their loyal fans. This is all thanks to Director, Wayne Isham [Cunning Stunts, S&M] who presents a great film.

The film starts with the great intro music of “The Ecstasy of Gold” a classical piece by contemporary Italian composer, Ennio Morricone. This intro music is accompanied by film footage of the city of Quebec along with short clips of the band getting ready. Eventually this music concludes and the band launches into a performance of the song, “That Was Just Your Life” off of 2007’s, Death Magnetic. This song is great when it comes to performance, but what caught me was the excellent light show throughout the song. The band followed this up with a performance of “The End of The Line” off of the same album. The band sounds great especially on the soft part of the song.

Metallica then launched into the thrash classic, “The Four Horsemen” which was originally written by Megadeth main-man Dave Mustaine, and titled “The Mechanics.” The band performed the track excellently, and you can tell that they had found their groove at this point. The band continued on with the track, “The Shortest Straw” which I thought sounded excellent, except when it came to James Hetfield’s vocals.

The arena went dark, and then we hear gunshots, and pyro. Any Metallica fan will tell you this means that the classic, “One” is about to be performed. As the clean arpeggiated chords and solo creep out of Hetfield and Kirk Hammett’s guitars the viewer can’t help but get chills. I found that this was one of the best performances on the film, and quite enjoyed how well the band pulls off the loud/quiet/loud dynamic, and also the bridge of this song always makes any listener happy.

The band then launched into a performance of the track, “Broken, Beat, and Scarred.” I found that this track was kind of mediocre, and was very hard to pull off, as the gang vocal, lead vocals, and riffs sounding weak and sloppy. But this performance was redeemed when the band followed it with the track “My Apocalypse” which is a great track that is even better live. After the song Hetfield gives a shout out to the openers, Volbeat and the mighty boys from Richmond, V.A., Lamb of God. Hetfield then addresses the audience, and asks them if they wanted ‘Something Heavy’ and the band delivered with an incredibly tight performance of their song, “Sad But True” off of their 1991 self-titled album which is often referred to as the Black Album. The band then goes into another classic, “Welcome Home (Sanitarium)” off of 1986’s Master of Puppets. This is definitely another great performance of a classic Cliff Burton-era Metallica Song.

The band then played “The Judas Kiss” which is one of my least favorite tracks by the band, but the guitar Hammett was playing was pretty cool, but as a said the only good thing about this performance was that it ended. Hammett then played cool solo featuring pieces of the great Scorpions song, “Sails of Charon.”  This lead into a performance of the song “The Day That Never Comes” which is one of my favorite tracks off of Death Magnetic, and also one of my favorite music videos ever.

Metallica then played two tracks off of 1986’s Master of Puppets the first being the epic thrash title track, “Master of Puppets” which was very tight and showed the bands musicianship especially Hetfield’s tremendous Rhythm and melodic lead playing. The harmonized solo between Hetfield and Hammett also sounded amazing. The great “Battery” was played next and the band was on all cylinders as they sped through the thrash classic.

The stage clears, and Hammett plays another solo which leads into a great performance of the band’s best ballad, “Nothing Else Matters.” This song is played expertly by the band and sounds just like the recording, but Hetfield’s vocals are often off pitch.  This is only a small flaw, but does not take anything from the performance. This track is followed by the epic metal anthem, “Enter Sandman” which finishes off the regular set quite well, and leaves the audience wanting more. The band delivers again with an encore consisting of a cover of “Killing Time” by Sweet Savage. They continue their encore with performances of the thrash classics, “Whiplash” and “Seek and Destroy” which are a perfect way to finish the set.

Overall I think this is a great concert film, and I think that it has a great audio and visual presentation. The audio is actually better on some of the live versions of tracks from Death Magnetic than on the actual album which was poorly produced. Be Sure to check it out!

Check Out The Full Film Below: 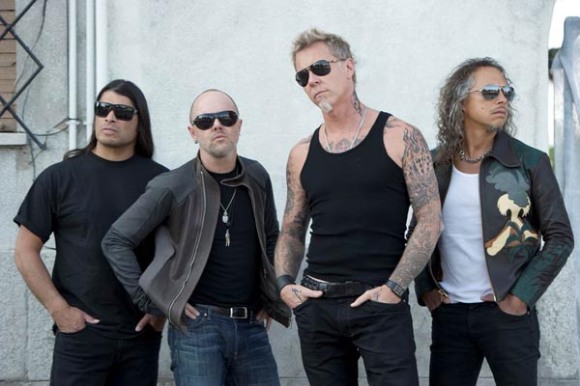